Researchers from the California Institute of Technology have created a new kind of electronic skin, which is directly attached to human real skin. This electronic skin is made of a soft, elastic rubber material that can be embedded with sensors that monitor health information. The health information that the sensor can record includes health indicators such as heart rate, body temperature, blood sugar, and metabolic byproducts.

This wearable sensor can also record nerve signals that control muscles. The sensor relies entirely on biofuel cells to operate, and its power comes from the body's waste product sweat. Scientists say that human sweat contains a chemical called lactate, which is very high in content. Lactate is a compound produced during normal metabolism, especially by-products produced by muscles during exercise.

The fuel cell built into the electronic skin can absorb lactate and combine with oxygen in the atmosphere to produce water and pyruvate, which is another byproduct of metabolism. Biofuel cells can generate enough power to power sensors and Bluetooth devices similar to mobile phones and car stereos.

The team chose the Bluetooth connection because it has extended connectivity and can be used in actual medical and robotic applications, although it consumes more power than near-field communication. In addition to creating a power source that can run on sweat, the team also faced the challenge of creating a sensor that could last for a long time with minimal attenuation. To this end, the team created a composite network structure, which contains file holes made of carbon nanotubes with platinum / cobalt catalyst. The composite material network structure can accommodate enzymes capable of decomposing lactic acid.

This fuel cell can use human sweat to produce a continuous and stable power output in multiple days, with a power output of up to several milliwatts per square centimeter. The researchers plan to develop various sensors that can be embedded in the electronic skin, allowing for multiple uses. Scientists intend to use this as a platform and point out that it can be used as a human-machine interface. 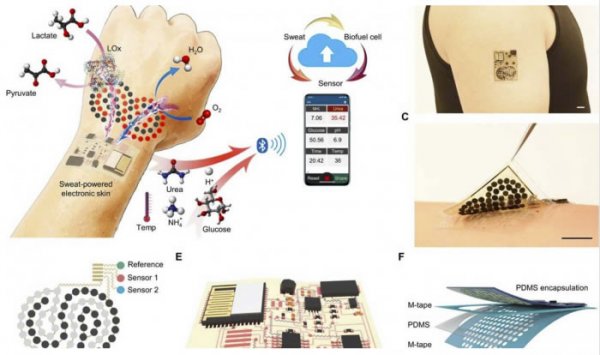